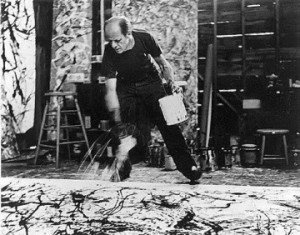 Worried about the future, bummed about your past? Will the next check make its way into your account? Get into your work. All those worries will disappear.

That’s it. It’s great advice. This is the most magical thing I know about work. And it’s a great realization that a bunch of independent sources arrive at on their own. Mihaly Csikszentmihalyi, in his book Flow describes a state where the individual becomes so engrossed in his task that he loses himself. Time slips away, physical needs like hunger are forgotten about and the individual sort of floats in a state of bliss while the daily struggles disappear as if of no consequence and fall away. In his powerful book The Power of Now, Eckhart Tolle describes a similar situation where the individual who truly lives in the here and now is able to let go of the nagging past and future.

It is probably true in a zen-like way that any work, or any endeavor (archery, motorcycle maintenance, sex) is suitable for the practice of this exercise, but work doesn’t just give meaning to our lives. It provides sustenance for life, it is the service of our life, in many ways it is our life.

The Nazis famously took a profound aphorism and, as they did with so much that had value, they perverted it to meet their own twisted ends. Above the entrance gates to several of the concentration camps they placed the words: Arbeit Macht Frei which translates to: Work Makes Free. We can only speculate why they placed these words there. Were they mocking their slave labor who apparently had no escape – not even inward? Were they trying to pacify them into focusing inward in search of some peace rather than outward at their captors? Were they simply doing what so many corporations do when they hang cute little corporate mantras to get more productivity from their employees?

Who knows, but, in theory at least, even slave labor can be a place that the individual can either fight and rebel against, or choose to accept and lose himself in. Again, I stress that this was a horrible situation, but more than one witness to the atrocities of the concentration camps or to prisons through the centuries have remarked upon how some are spiritually deadened by the experience while others are able to endure the experience more less intact. And still others achieve transcendence.

Which brings us to A Day On. Thank God most of us will never have to endure labor camp conditions, but most if not all of us have experienced mind-numbing jobs. Perhaps you have only just now considered applying the principles of A Day On. But you are not in a place where you can divorce yourself from the job or situation you want to move away from. Freedom can be found in thoroughly applying yourself to that work. Dull and unrewarding as it might be, investing yourself fully in it will instantly make it more palatable, and when this happens your energy level rises rather than falls. This same principle applies to people and situations we must get through as well. Like them (notice I don’t say “try” to like them), genuinely find things that you like or, better yet, love, about them and they magically become lovable.

When I was in high school I found a program aimed at helping students get higher grades.  It was my friend’s, but he hadn’t been interested enough to read it or listen to the tapes. It was called Where There’s A Will, There’s An “A.” The program gave advice that you could implement right away, the very first day of class, or if you came late to the program you could begin using it at any point and you would likely see improvement in your grades. But the information given was simply aimed at making the student more engaged in his or her courses. And it involved some very simple steps such as a few listed below:

Claude Olney, the program’s creator, understood that when the focus shifts from the “payoff” to engaging in and enjoying the work, the payoff naturally follows. The point is that by becoming actively involved in your work, by setting and achieving goals, by proactively reaching out to others and offering suggestions as to how we might help, by learning some new technique each week, by finding our own new ways to engage, in short, by loving our work we will experience intrinsic rewards that will mitigate the emphasis we place on “the payoff.”

Of course, I’m not saying that you should endure work that does not draw you to it if you have a choice. How much you endure in order to put yourself in a better position financially or otherwise is up to the individual. And, we should not forget that these guidelines of involvement should be implemented even more once you are doing what you love to do. After all, like a good farm field, you want to nourish it and not let it’s fertility become depleted. So, it’s about engaging in work’s here and now… and yet, when you place yourself into your work… the payoffs do follow in surprising, unpredictable, almost mystical ways.