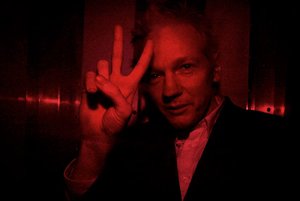 I have been thoroughly enjoying the ways both the political and media establishments have been thrown off balance by the recent releases by Wikileaks which at first glance doesn’t seem to contain much substance or firepower.

So, our dignitaries and heads of state are calling each other names, making fun of each other’s escapades and character flaws on the taxpayer dime. There was even a few references by outwardly restrained government representatives about being at their wits end with badly behaving nations such as Iran.

So, why are the press and the governments suddenly so preoccupied by a service that amounts to little more than giving the average web user the ability to eavesdrop at mom and dad’s bedroom door? It’s called job security – on both their parts.

Suddenly the average grunt has an outlet for all of the juicy gossip that he sees. This, my friends, is real Democracy. In the past the informed information consumer met his liaison (the media) on his front doorstep each morning and was guided along the prescribed path where he was shown prepared statements by world leaders. And this was our only choice. Much reading between the lines was done because we the information-hungry consumers realized there had to be more going on than the press was showing us – or that was shown to the press.

Textbooks don’t change regimes – novels do. The “just the facts” approach is now in danger of being once and for all overtaken by the “salacious details” approach. People don’t care so much about a leaders stand on an issue or particular policy. They can learn more about their character by knowing what they said “off the record.” A friend who was once a sailor aboard an aircraft carrier told me how they get around hauling garbage back to port and paying to dispose of it. “We have permission to dump any food-contaminated waste,” he explained. “Otherwise it’s insanitary.  So, what we do is throw a pot of chili into the garbage hold. Food contaminated! Then we dump everything!” You would never find this out by sending a reporter to the USS Abraham Lincoln. Everyone cleans up their acts because they’re afraid of losing their jobs.

The greatest cover up in the world is the one that goes on all the time. It’s the endless daisy chain of covering your ass. We cover our ass because we offer substandard product, or else we fuck up and refuse to admit it. Either way, now we’re going to get to see how “sausage” is really made.

But institutions like governments and press are made up working stiffs whose first goal is to remain comfortably employed. Oh, sure there are the ambitious investigative journalists like Bob Woodward of Watergate fame who put it all on the line, employment, reputation, even their lives, to dig down deep and get to the real truth. But big corporations lose sight of the mission and everyone gets fat and lazy. It’s a natural tendency. Budweiser, the King of Beers, no longer remembers what beer is about… and up sprout the passionate microbrews. Democracy!

Everyone who has a job knows that there’s the company line that you’ll get from the upper management or corporate mouthpieces, but they also know that if you really want to know about whether or not to eat at a restaurant you have to ask the dishwasher or busboy.  They are the ones who see what’s really going on and who aren’t afraid to tell you about it.

Up until now, because of “Journalistic Standards” applied willy-nilly, the dishwashers, busboys and grunts of the world haven’t had a voice. After all, they’re just busboys. We want the word from the top dog. But now Wikileaks has given their voices a venue and the establishment is nervous as hell.

What cost our leaders a trillion dollars, thousands of US lives along with the reputation of our country in Iraq is now transpiring at little or no cost to America in Tunisia and Egypt. Wikileaks is proving that the cursor and the web-cam is indeed mightier than the sword and even mightier than the pen.

The populace is about to hear the collective watercooler gossip of their elected officials. They will discover how tax dollars are really spent, and learn as well that the things that need to happen to make this a better world are being held up because of the silly office politics of… politics. They will come to understand that productivity in government is a priority that falls far behind job security if at all. And, maybe we as a culture will learn a lesson from this cautionary tale: Don’t work a gig you wouldn’t want a spotlight shone on.