When Your Kid Teaches You To Follow Your Bliss 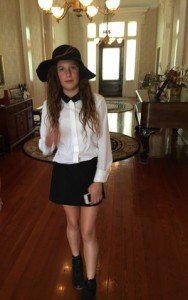 I like to think of myself as the kind of guy who’s all about “follow your bliss” and open to other people’s crazy dreams. In fact, I would go so far as to say that I like to think that I sometimes relish creating awkward-feeling situations wherein I dig for other people’s crazy, passionate dreams, even (or, especially) the ones they’ve carefully and cautiously packed away with no intentions of ever letting see the light of day. Obeying no sense of decorum carefully circumnavigate their gatekeepers in a quest to get inside and liberate the hidden puppy mills of the soul.

But, sometimes, when it comes to my own kids I feel the need to be the cautious parent. It’s a protective urge designed to mainly protect them from their own disappointment. It’s fleeting, but it’s there.

I tell them it’s okay to dream big and deep and, according to others, unrealistically. After all, what’s “realistic” anyway, anymore? Is it realistic that a tiny spaceship is buzzing by Pluto right now sending us photos from tens of millions of miles away? It’s completely unrealistic to the uninitiated mind but that doesn’t mean it’s not happening. And, it’s happening because somebody somewhere on this tiny insignificant speck in the universe acknowledged a crazy vision borne entirely within his or her mind and then went to work.

The crazy dreams and aspirations of others makes us a little bit less lonely in our craziness. When others bring their dreams into reality they light the way for us to follow.

My youngest daughter, Eva, throws herself into her passions, and though I might not understand them in the real time that she experiences them, I love that about her. Her latest obsession, the show “American Horror Story: The Coven” centers on a society of witches living in New Orleans, so this year she suggested the destination of our family trip be a pilgrimage to the city of the Coven. Specifically, she wanted to visit the location of the show’s Miss Robichaux School for Exceptional Young Ladies. Quietly she prepared in ways I could not have made sense of at the time. She convinced her mother to take her on a thrift shop expedition where she purchased her coven apparel – something based on the uniforms for Miss Robichaux’ School for Exceptional Young Ladies.

She quietly packed the outfit away in her luggage – an outfit that I would have thought unnecessary and unpractical considering the heat and humidity that awaited us in New Orleans in mid summer. It consisted of a black, broad-brimmed hat, a white, long-sleeved and collared button-up shirt, black miniskirt and black boots. Surely even a cast member of Coven wearing such an outfit would not have actually walked the hot mid-day streets of the Garden District wearing it. They would have retreated to air-conditioned trailers between shots.

Eva was disappointed to learn that after arriving in New Orleans late in the evening we would not be trekking in the dark to find the site of Miss Robichaux’ Academy; she would have to wait until morning. And when the morning came she appeared fully dressed and ready to begin the 2-mile walk in 100 degree heat – everyone else in shorts and loose-fitting attire, Eva fully wrapped from her chin to her wrists.

She walked with purpose and when I knew we were close I turned my camera on her and let her take in the historic mansion’s beauty. She posed for pictures outside the locked gates and told us about the building and its place in the tv series. When it seemed like we had exhausted every camera angle at the imposing, locked cast-iron gate my wife, Eva and her older sister walked around the side of the house.  Big sister Emily implored a caretaker to let us in but he only smiled impotently and waved. We headed off in the direction of our hotel when a woman appeared on Miss Robichaux’ balcony. She too waved at us and we called out that we loved the house and that we were brought here by American Horror Story’s biggest fan gesturing toward Eva.

“Oh, look at you,” said the woman who it turned out was the house historian. “Meet me at the front,” she said gesturing broadly to the imposing gate.

All this to say that the gates swung open for us and a little girl was able to explore what before she had only imagined. Illusions were transformed into a reality that she would have to sort out and no doubt still is.

All this to say that Eva reminded me that you have to get dressed, get into character and knock on doors in order to gain admittance. Forget that the most improbable doors are the ones you absolutely HAVE to knock on.  On this vacation Eva truly followed her bliss regardless of what anyone including the weather man and her old man cautioned and dissuaded. And it was all worth it because the fact possibility follows action is one of life’s most important lessons.