Is Virtual Reality the Cure for the Common Commute? 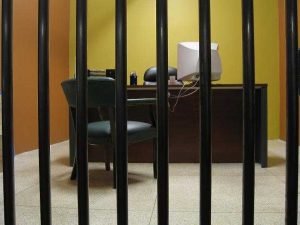 The other day I saw a well-researched article by Greg Rosalsky titled: The Economics of the Office: Why Do We Still Commute?

The article set up the problem alongside a possible solution. Even though the personal computer was supposed to liberate us, we still find ourselves traveling to the office more than ever. Enter Virtual Reality as the hero of this story. Could Virtual Reality allow us to represent at the “central office” location while allowing us to be physically located presumably at our home or local tavern or any other damn place than the workplace?

Of Course the Commute Sucks

Ten years ago I remember dreaming of not commuting as I drove my 45-mile morning trip into, through and beyond the city of St Louis. Listening to NPR, I heard a story about how a new movement was beginning of workers who were reprioritizing the place of work in their lives.

According to the NPR show, even way back in the dark ages of the early 2000’s people dreamed of not commuting to work.  But I’ve always felt that there was more to it than just not wanting to drive a long distance.

The question is why?

I’ll sit in a cubicle if and only if I feel I’m part of a fucking revolution. But maybe that’s just me.

Business Owner or Human Resources Person, what can you deliver at the designated “workplace” that can’t be delivered via email, text and if necessary Facetime?

The article suggests that these technologies just cannot create the fertile conditions of the productivity petri dish that is the work place. It seems that a whole mess of shell-covered slime is required to pass a pearl-sized piece of productivity.

People hate their commute. No shit. They don’t like feeling bad about the shit that their cars are pumping into the atmosphere. Cause they kinda don’t want to kill the Earth. They hate the uncompensated hours and miles of pent-up stress. But, ya gotta get to work. Am I right? According to Greg Rosalsky we’re expected more than ever to go to work, perhaps because the commonly-held belief is that human face-to-face interaction is where productivity happens.

Show me your facts and figures all you want but I call bullshit. There are plenty of ways for us to get things done that we want to get done. As far as I’m concerned physical proximity to the point of becoming cell mates doesn’t have to be one of them. And if it ain’t getting done without me going to some bullshit office, then I guess I’m not your man. What would be worth me going to the workplace and leaving my family behind, leaving my world behind, leaving my home behind… even leaving my trusty mutt and kitty behind would have to be something that I was really into to the point of not giving a shit about the florescent lighting and crappy chairs that are provided.

I’d have to feel like I was a part of a fucking revolution. I’ll sit in a cubicle if and only if I feel I’m fighting the good fight. But maybe that’s just me.

This just in: People prefer spending time at a place they have created in their own image and are still paying a mortgage note on over some bullshit office. Be it ever so humble, there’s no place like home. An office full of bullshit decorations to trick you into thinking you’re some place you want to be. You know the place. Like they way zookeepers used to paint jungle scenes on the walls of animal cages. Most offices are just lame attempts at approximating a place where everyone can be productive. Let’s get some flowers in here to freshen up this room. What the fuck is that?

Some offices have gone the other direction. They make being at the office enticing as can be with drinks, scooters, guitars, places to just chill, baristas, masseuses, dry-cleaning pickup, day care… Lipstick on a mother-fucking pig called uninspired or unempowered human resources managers. Whether you fall into the trap or are enticed there you still end up in the trap if it’s not where you long to be.

So, HR people can go one direction: Make your workplace the coolest fucking place on Earth. Or fight a never-ending battle for the constant turn-over of the uninspired worker. If there’s not a solid reason to go there there will only be ever-mounting reasons why not to go there.

Virtual Reality As the Solution

If you believe the argument that in order to be productive and revolutionary humans need to be in close proximity to each other than you might accept that Virtual Reality or VR might provide the solution.

Assuming that the VR experience can simulate the intricacies of human interaction it does provide some interesting possibilities when it comes to outfitting the perfect office experience.

Maybe when we begin meeting in Virtual Reality we will discover that office drab is actually what’s needed. But maybe programers and Virtual Reality designers will begin designing virtual offices that will fine-tune the right mix of aesthetic for ultimate productivity. Perhaps our virtual selves can be represented most effectively against a completely flat grey background – and maybe this would be perfect for really dialing into what each other is saying. Or maybe a more stimulating background is required. Maybe the outdoor cafe setting of 1920’s Paris Duex Magots would be most conducive to conducting a book marketing meeting. It worked well enough for Stein, Hemingway, Dos Passos and Picasso. 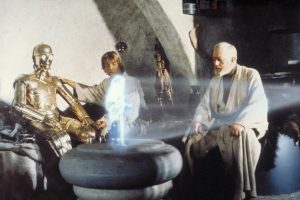 Is “Office Drab” the way the Virtual Reality will simulate our workspace or we all be discussing the team plans in a cabana on a Caribbean Island, in a custom-designed library with celestial ceilings and a slight echo? In Ben Kenobi’s cave on Tattooine?  We might actually be able to hold meeting in the place that the Declaration of Independence was finalized on that hot summer day in 1776.

I guess that would be pretty cool. Especially if all I had to do was slip on a helmet and some gloves at my home office. Yeah, sign me up for one of those devices.

But until you’ve got that ready for me to slip on, and a boss who’s willing to accept it and not abuse it, I’ll be right here at my humble desk, with my dog at my feet and my cat curled up too close too my keyboard.