The Pleasures And Sorrows of Work – A Book Review 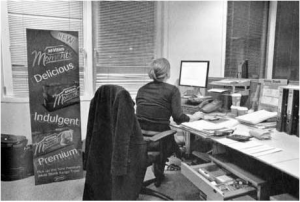 As you travel along your own particular path you sometimes find yourself a bit lonely for company. At best, you enjoy the camaraderie of the odd fellow traveller for a while before you must both again head off into the unknown. Few, it seems, share your language, and often those who do, can only follow your thoughts so far.

In his newest effort, Alain de Botton, offers us several excursions into the strange love/hate and, more often, indifferent attitude that so many workers feel about what they do.  Once, a self-described atheist friend picked up a figurine of Jesus Christ playing soccer with some children. The front of the little statue read: Pass It To Jesus.  He mused: “Just think: someone in China is painting these as they pass by on an assembly line. What must they think about that… this strange product that they are a part of producing… and the motives of the people who would purchase such a thing?”

Botton’s book shows us assembly-line workers, but it also shows us guidance counselors, artists, marketing executives and motivational speakers, but it examines workers and work in a more analytical way than say, Working, by Studs Terkel. Pleasures and Sorrows of Work not only allows us to peer over the shoulders of a variety of workers, in it Botton offers us analysis of the simultaneous deadly serious / ridiculously silly nature of so many of our jobs.

I actually found myself laughing out loud several times during my reading of the book, notably when Botton described the war of wafers between a British biscuit company and their competition. All the terminology was befitting of the most significant of military maneuvers, the bounty’s at stake were actually worth more than the entire affected economies of several monarchies, and the volleys took a serious psychic toll on the individual members of the two cookie-company “armies” of over 10,000 workers.  And yet Botton is able to place his reader in a position of a bemused extraterrestrial watching all the sound and fury transpiring on the battlefield of England below.

Botton doesn’t publicly side with one approach to work or with one cause for work (the biscuit marketing manager seems perhaps even more gratified by his career choice than the career counselor, a would-be author.) Rather, Botton seems as interested in the notion or phenomenon of “work” how its meaning has changed as we have evolved, or possibly devolved, and what elements of it are necessary to feel the rush of pride and meaning and purpose, and what elements have become redundant, distracting, draining and even fatal.

Beyond the recognition of the avenues of thought that Botton chases down and develops, the book is also filled with black and white images that, when the book is discovered, appear to be anti-photographs. They are images that in almost any other context might be considered unremarkable. They appear to have been accidentally taken when the photographer shifted the camera from it’s intentional focus and perhaps accidentally clicked the shutter.  Or else, perhaps, these photos might have meaning in one of the ultra specific worlds that Botton is investigating. A corner of a parking lot. An interior of a fish-packing plant. A lone man at a desk in an illuminated corner office taken from outside his building on an autumn dusk.

But these are precisely the type of illuminations of the mundane, strangely enshrining and ridiculing simultaneously the lived-in, yet sterile world of the worker; a piece of a larger puzzle, that A Day On visitors will probably find beautiful. It is, that Botton by writing this book, allows us to be separate in our analysis of this world as workplace, he allows us to be a voyeur, a wayfarer, a disconnected observer. I find that this is one of my favorite parts of taking A Day On: being able to walk among the workers while being divorced from their schedule and concerns and standards.

Part of the joy of embracing A Day On mimics flying in that while soaring is a pleasure in itself, it’s also satisfying to look down at the others who are still crawling across the surface of the earth in what now seems a primitive way.

We observe the accounting CEO as he imposes a lifeless, self-serving “pep rally” on his hundreds of subordinates while over his shoulder a corporate logoed powerpoint slide lists his unoriginal expectations: Living the Firms Values, Valuing the Customer, Interacting with Other Departments, and mostly (yeah, right!) “Have Fun !!!”

The Pleasures and Sorrows of Work examines a world where increased production and bottom lines have taken the place of relating in a human way to one’s handiwork, where corporate generals are forever searching for the next incentive to induce subordinates to deny their individuality and increase productivity for yet another day, yet another quarter, yet another fiscal year, and where individuals’ stomachs are filled with chocolate biscuits in lieu of their lives being filled with meaning and belonging.

In short, it’s the kind of book that elucidates what we at A Day On already believe: that we would gladly trade a day off for A Day truly On.