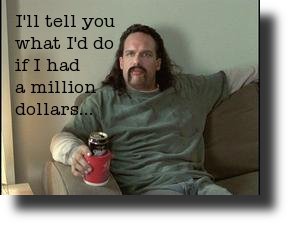 Lawrence from Office Space responded in his own memorable way to the question. Everyone has encountered the “Million-Dollar Question.” What would you do if you had a million dollars? Of course, a million dollars doesn’t seem as infinite as it did when you were a kid… or, even as infinite as it did two months ago. But, you get the gist of the question.

Are you doing it? Why not?

If you are doing it, what led you to doing it? Was it difficult to just start doing it? Modern-day bard Neil Peart discusses doing what you would do in his songs. In “Limelight” he writes: “Those who wish to be must put aside the alienation, get on with the fascination, the real relation, the underlying theme.” It’s just another way of saying what Joseph Campbell tells us to do when he says: Follow your bliss.

One answer I have heard many times is: If money were no object I would volunteer.

And, this got me thinking. We already are volunteering. In the Western World anyway, where slavery is relatively scarce, we are all doing what we are doing more less voluntarily. I mean, we may have allowed our debts to necessitate some servitude in order for us to make good on paying them back. Hopefully, if this is the case, we have put ourselves on a budget plan to extricate ourselves from this ruthless master.

But, we’re where we are voluntarily. Maybe it’s the classic coping mechanism of acting like there’s some outside force making us be where we are that allows us to begrudgingly get through the day.

But wait, that sounds crazy. Are you saying that we need to feel “forced” to inhabit our situation? Erich Fromm wrote a book about this particular pathology. Escape From Freedom explained that the reason people seek to be dictated to (in his case, in Nazi Germany) is because they don’t feel they can bear the responsibility of the decisions necessitated by true freedom.

This is crazy! This is the nature of humanity. Decisions frighten us. I’m talking about the “outside of the box” decisions that exists outside of everyone of our boxes. We all have boxes. But, who makes it their life to not have a box? The artist.

I came across an interesting book the other day. On Escape (De l’Evasion) by Emmanuel Levinas, this book is about this very phenomenon.

I would submit this one assertion: Just as we behave as if we need this imaginary jailer  keeping us trapped in a life we claim we would not choose, that million dollars is nothing more than an imaginary liberator. If we keep waiting for it to arrive, we will never taste true freedom.

The word “decision” means to cut or to sever.