The Curse of Workplace Success 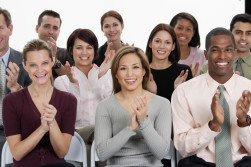 Sometimes it happens. You know the scene in the romantic movies when there is every good reason for the heroine or hero to walk out that door into a world full of other possibilities, but then their romantic opposite takes the initiative… changes… does something heretofore out of character. And there’s that dramatic moment of hesitation at the doorway before… turning around walking, trotting, running back into the waiting arms of the other. The bouquet of flowers falling to the ground as the couple enters into a passionate, face-gobbling embrace. Then they begin to spin as the camera circles around them in the opposite direction.

There’s no name that I know of for that breaking point moment in behavior that allows the possibility for love to happen. But sometimes it does. In movies, in love… and in the workplace. What do you do when, just as you were about to turn in your resignation, your unappreciative boss suddenly does a 180 and decides you’re the best thing since sliced bread?

The Creative (that’s you) finally recognizes that the workaday 8-6 world is not the place for him. The next step is when you begin looking at your problem constructively. You do some research on ADAYON.COM.  You begin taking your proactive days on. You are not moving methodically into the next realm. Soon your new life, the one your were borne to live begins taking shape around you held together at its earliest stages by the scaffolding of ADAYON. It begins to rise, gleaming into the world and gradually others begin to recognize it.

In a practical sense, you have begun carving away your few precious moments that your job has not been able to confiscate, and you have invested and built upon them. Now the structure of your life is taking on its own shape. It is now showing evidence that it will be able to provide for not only your spiritual needs, but your material ones. You’re already starting to move in, and finding it very comfortable.

Then your boss offers you a giant raise, a new office or maybe the ability to work from home a couple of days a week. “In my particular case,” recalls Shelby Hinton. “I came in one Monday ready to empty out my desk, and found that the company had replaced all the dismal old equipment in my office with brand new, gleaming equipment. They had surprised me with my dream computer and all the software, hardware and other goodies that had been on my secret wish list. How could I quit? I teared up.”

Jim Smyth saw it happen this way: “My employer suddenly started recognizing my hard work. Then, I started having successes at my job. It actually became a situation where, for the first time in my life I was actually enjoying going into the office.  All the thing that I associated with my “Days On” were happening in the work place: I was getting up early, full of energy and diving right in. I was able to enjoy my personal time because I had lost my overwhelming anxiety whenever I had a thought about work. I started to like my job just when I was ready to jump ship.”

Why does this happen? Perhaps it is akin to the “new girlfriend” syndrome. Guys describe the phenomenon of not being able to get any attention from even the most unattractive of women until…

That’s right, as soon as you find one and enter into the committed relationship. “That’s when every woman suddenly seems available to you,” says Dr. Philip Siddle, a relationship expert. “Another way of looking at it is when you look at the person trying to get their ex to come back and show interest in them. They try everything to get the ex to look at them lovingly and nothing works. Then, as soon as their own interest turns to another potential mate, as soon as the new romance begins to blossom… the long-awaited phone call comes.”

INVESTING IN YOURSELF MAKES YOU MORE ATTRACTIVE

Plainly put, when your expectations of your job were to be badly-treated, underpaid, and unfulfilled that’s exactly what you got. Like the victim of abuse who seems only to find abusive and controlling relationships. Everyone on the outside says, “Why does she stay with him?”

The answer is, she stays with him because she doesn’t really believe she deserves better. She doesn’t know what better feels like. She might actually be addicted to being treated in such a way.

Before A DAY ON began providing a method for overcoming indentured workplace servitude many were simply victims to the belief that, well, “that’s why they call it work” state of mind.

Now you have broken free of the bonds and suddenly the abuser has come to its senses. The roles have reversed. Two forms of respect have been established: Theirs of you, and Yours of yourself. The latter is what you took control of, the former is what followed.

“Looking at it like this begins to bring the situation into focus,” says Dr. Siddle. “You have begun to establish yourself as a powerful and thus attractive individual and you have subsequently begun to be recognized as such.”

THE DANGER OF BACKSLIDING

Like our friend the once-abused woman who has established a newfound self-respect and who has attracted the attention of the one who once mistreated her. Remember that old habits die hard; theirs and ours. Just as you sometimes feel tentative about your successes, not quite believing that good things can really happen to you, so do those who once took advantage of your insecurity.

“One trick for maintaining this success is to establish boundaries,” says Dr. Siddle. “After all, this is what brought your your new successes, although you might not recognized them as such.

A DAY ON encourages visitors to carve out a little piece of what is essential about themselves and begin implementing a nurturing of this seed in their “real life.” This is what taking A DAY ON is all about. It is about reserving time away from everyone else’s demands to explore and fulfill your own destiny. Of course this is empowering and attractive.

The important thing, when you walk back into that old office or that old relationship is not to be thrown off balance by the reactions that other people have to a new empowered you. You must remember with every step that you take what empowered you to walk so lightly. And you must realize that for best results when operating in a once hostile environment that landmines could still be planted just inches under the soil.

Continue living A DAY ON.