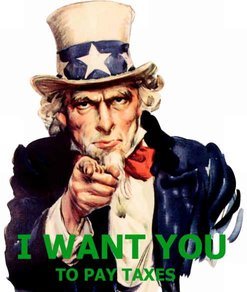 I paid my taxes yesterday – yes, right on Tax Day. I owed a lot this year and had to write big checks from a bank account that is now pretty much depleted. And I know there are a lot of people, many of my friends among them, who would expect me to come over to their side and rail against the IRS or Big Government, but I’m not going to.

The Boston Tea Party was not a protest of taxes in general it was a protest against not getting anything in return – and I would argue that we in the U.S. get a lot in return.

First off, the fact that I underestimated my income this year and had to pay more than I had expected means that my business is growing. Work has been good. I’m getting enough assignments as I now mark my fourth year of self-employment that I stay pretty busy. And here’s the kicker – I love my job. It is a privilege to serve my fellow business owners to make their businesses stronger.

We can all commiserate and argue that we are working too hard for the Government to steal what we’ve produced. I don’t know about you and your situation, but, relative to most people in the world, I don’t work that hard. I really don’t. I don’t feel exhausted at the end of every day and see a life of toil stretching out for eternity punctuated only by days off for illness or, God forbid, involuntary loss of a job. And I would recommend to my friends who claim that they are self-employed and that they do take on enormous burdens just to pay Uncle Sam that they might want to find another line of work. I suspect either that they don’t truly feel that their work is so unbearable as they let on or that if it is it is because of their own failing for pursuing irrational material expectations, an ineffective work strategy or something else that is just beyond my understanding.

I have to admit that the world I live in outside my own personal sphere is pretty comfortable. I can hear the banging of my trash (consisting mostly of unnecessary environmentally harmful packages) being picked up from the sidewalk as I type this. The street is clean and passible as far as I can drive. When I jump in my (not optimally clean) carbon-emitting vehicle to travel 50 miles this afternoon to a training session I will be leading I can predict now that the traffic on the St Louis highways will be flowing reasonably well. I would much rather ride State-sponsored mass transit but unfortunately it is only beginning its revival in the Midwest. The police and fire department, should I need them, will be responsive and I won’t have to negotiate or bribe them.

My internet service that I rely on is predictably fast – though, I’m told, not as fast as in some other countries. My bank and credit accounts are reasonably protected and stable as is the currency that I use to transact business.

My children are being taught in a safe environment by capable instructors and they are eating nutritious, safe meals at lunch.

Make no mistake, I’m a do-it-yourselfer, I would rather work on my own car, computer, website etc, but I’m happy to turn over a substantial portion of my income for the services provided by the State. True, there are inefficiencies in the government and in State-run institutions. But find me a business or any organization of humans where there aren’t inefficiencies.

I’m not naive, while it appears that today we have downgraded our massive and unnecessary wars to skirmishes by comparison, I’m sure that our collective dollars are finding their way into some dark places.  And light needs to be put on any misspending and those who hold the purse must be held accountable.

The United States on April 16, 2015 is not a panacea – but for a man and his modest family who want to pursue their dreams, who were educated both privately and at the State’s expense, it’s pretty damn good.