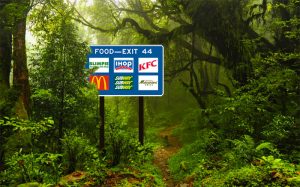 So, I’ve been eating a Vegan Diet for the last week now. It’s a little difficult and it requires thought. And that’s why I love it.

I used to work for a guy who was on a diet so restrictive that it actually made the dieter’s body temperature drop a couple degrees, a diet not recommended for teen-age girls because semi-starvation prevents menstruation. Sounds horrible, but he enjoyed it the way some people like to pierce their skin, get tattoos or other forms of mild self-torture.

For me, adopting Veganism is more a way of creating a game out of eating. It was a way of injecting scarcity and chance back into a part of my life that had become routine, unconscious, unhealthy even gluttonous. Rather than resenting the inconvenience of a limiting diet I embrace the self-imposed scarcity. 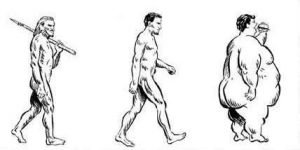 Most of us aren’t toned the way a wild animal or some aboriginal man is toned. Not a personal criticism, more of a societal observation. The abundance man has cultivated has had a downside. The machines have been given too much rich fuel; they aren’t running optimally. Like me, you can run five miles or more almost every day and you’re still up against the man’s most triumphant trap – food is everywhere; life is too easy. You can’t outrun a bad diet.

After watching “What the Health?” the other night at my daughter’s insistence I decided to try Veganism. Regardless of whether the movie came to the right conclusions or not (Veganism being the only healthy option for humans) I decided to move to a plant-based diet.

My go-to comment on Vegetarian cooking was always: This is delicious. I could be vegan if I only had someone cooking it for me. If it were only more convenient. So, I liked vegetarian the only objection was the inconvenience.

But now, looking at diet as a kind of game, I see that finding food should be difficult. So, the disadvantage (lack of easy availability) used to be my objection but now has become my motivation.

When we humans were traversing the vast savannah we didn’t know where our next meal was coming from and our bodies evolved to hoard and store sugars and fats. Now, food’s easy availability is our curse. Our desire to graze on anything and everything is completely natural, and these days, with calories too available, it has become deadly.

It’s safe to say that consuming, the gathering of necessary nutritional fuel, has become twisted away from its essence.

Self-imposed scarcity might not be new – after all it’s been around since the first person decided to “go on a diet.” But, for me, the “game” of accepting and even enjoying the empty hunger, the strange looks when I opt out of ordering at the business lunch, the conscious avoidance of what’s available just because has made it fun.

How might voluntary scarcity be applied to other aspects of our lives such as spending, recreation, sex, work, relationships?