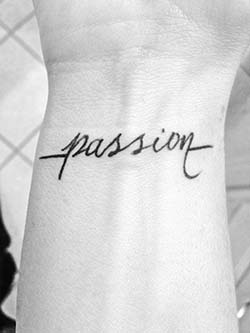 Through his books Joseph Campbell told me: “follow your bliss.” Some complain that they don’t know what their bliss is. I would suspect that most of us have a thousand things that we could love to pursue; it’s just a matter of focusing on one of the places where you feel blissful. It wasn’t until about ten years ago that I began seriously thinking about trying to escape from the common work life made up of unreasonable commutes, nagging bosses, constraining cubicles and the rest.

Very important: your bliss isn’t a single thing – it is the feeling you get when you’re in alignment and your psychic needs are being met. And sometimes pursuit of a goal leads to bliss. Continue following the goal and being in your bliss. The thrill of the chase. But what to chase?

As I write this from beside a warm fireplace at my local coffee-shop I look up and notice the small tattoo on the inside wrist of the girl across from me: “Passion.” Is it a reminder of the importance of rediscovering something she has felt a glimmer of? Is it a prompt? Her younger self sending a message to her future self? The value she places on the rush she always wants to be able to tap into?

I wasn’t really feeling it this week – passion, that is. The chase felt cold and a little meaningless. I tried to blame it on the change of the seasons. Fall came cold and hard and wet in the St Louis area this year. But that wasn’t it – I was uninspired in my work.

I think of Thoreau at his simple lakeside cabin. And then, wham, something deeper than just a challenge, stronger than just a bad day comes along and hits you. You recognize the feeling – you’re in a rut. Thoreau realized this literally. He tells us he knew it was time to leave Walden Pond when he realized he had worn a path from his cabin door to the lake.

It’s disheartening to arrive some place nice and soon feel the itch to leave all over again. This blog post is about not getting too comfortable. It’s about accepting that we’re always a little bit hungry and always scanning the room for an emergency escape.

Maybe, like the girl with the passion tattoo, we’re just responding to an itch to be deeply engaged.

The Longing is a Gift

Keep learning: I’ve been exploring some social media options that are new to me, dabbling with programming, listening to a few podcasts. Two notable favorites are the Tim Ferriss Show and the How Did You Get Into That? podcast hosted by Grant Baldwin.

Immediately after the panic “Oh shit, I’m in a rut” realization I felt a sense of excitement at what might lie on the other side of this rut.  I felt a sense of gratitude that even though I liberated myself from the outside workplace a couple of years ago there is still a longing to seek more freedom – to expand what is possible for me. The longing is a gift.

Like Rick Steves who has turned his European wanderlust into a fulfilling life in which he facilitates the travels of others who share his longing to connect with distant cultures, Grant Baldwin has made a life of asking the question that elicits compelling stories of life adventure. We sit around the podcast campfire and listen to tales of the modern-day hunt.

Baldwin’s guests discuss their journeys, and I can’t help but think that the journey itself is where the art of a great life is. Understanding every aspect of the journey – the initial itch of dissatisfaction, the inclination to move on, the preparation and the first step, the method of navigation, the recognition of a point of destination and the hauling of oneself ashore are collectively the art that I want to master – and that I want to pass on to my children and friends.

Tim Ferriss is all about pushing every life-limiting envelope that most of us just accept. He is a self-experimenter: he measures and graphs and tests and pushes every limit he encounters – and yet, through his podcasts, you get the feeling that he feels that his own achievements (of which there are many) are dwarfed by his guests. Ferriss is an excited puppy bouncing from question to question trying to understand what fills his knowledgeable guests’ minds. Ferriss is unabashedly passionate about growing and improving and learning. How can you not love his passion!

And like Ferriss and Baldwin, Steves and Thoreau I want to be both a self-experimenter and chronicler of the journey.  And so, this post.

When we put too much emphasis on the destination we forget about the excitement of the journey. To me, the excitement of preparation and actually leaving the safety – the sense of exhilaration was what I loved most.  And now, like you, I must decide… what is the next step and where to next?