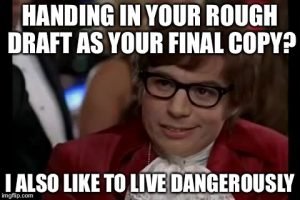 It occurred to me that I’m a Rough Draft guy than a Final Draft type. I’m someone who prefers thinking of himself as an idea guy, a concept person but who has trouble digging down to the details. For example, I’ve come back to edit this post and others months after I published them in an imprecise state. How could I let myself do that I’m starting to wonder. And wondering things like that make me realize that I’m changing. I’m turning into a Final Drafter.

For 5 decades I feel like I’ve been scribbling down the rough draft of my life and lately I’ve gotten the distinct feeling that some of these things need to be polished and some thrown away.

There may be others out there who are feeling the same things. A desire to pull it together. To go back and revisit things we’ve given short shrift to.To work muscles that we’ve never felt the impulse to flex.


As a Rough Draft-er I’ve gone at every decision from a stream-of-consciousness, through-everything-at-the-wall-and-see-what-sticks approach rather than by aiming for the “finished product.” Is that really a decision or the avoidance of decision? “If you choose not to decide you still have made a choice!”

I’ve just denied the existence of rules I didn’t want to follow. And only a few times have the rules come back to bite me.  Life has just been an exercise where you take a blank page of art paper and just throw ideas all over it? Why wouldn’t you want to live this way. It’s total freedom! No need to obey lines or margins or even logic. I’ve been rewarded for scribbling.  It’s been as easy as falling down. But lately the urge to… boil things down? To clean things up. To make something actually work. Why now the urge to do that?

It’s do or die. Well, it’s die anyway – now closer than it’s ever been before.

I started running a few years ago. One podcaster I listen to on my runs always asks his high-powered guests: If you could go back and give advice to your twenty-year-old self, what would it be? And most of them say the same thing: “Don’t be so hung up on deadlines. Take time to smell the roses. Don’t take it so seriously. Don’t work so hard.” And while part of me is relieved to hear my inner voice coming out of the mouths of prolific geniuses I also realize that for them this represents a change in mindset. Had they actually been able to effectively teach that lesson of slowing down and working less to their younger selves we wouldn’t be listening to them right now because they wouldn’t have achieved shit. Though they might have something we are having a hard time seeing all around us.

Today, on my run the podcaster asked his guest what advice he would give his younger self. The response: “Stop fucking around. Life is short. Finish something. Get going.” I literally stopped right there on the running path and rewinded.

“Stop fucking around. Life is short. You’ve been preparing. Now finish something. Get going.”

Maybe you’re like me. You like what you’ve taken down on the note cards of your life, ideas and experiences and a bunch of little paths explored just so far because another path lured you off. But, what is it adding up to? Is it time to start working on the final draft? Is it time to connect the dots? Is it time to publish?

So, we’ve made it through intact, unscathed, still sharp. And, here’s my advice for my 50-year-old self.