I’m a Neil Peart fan.  Friends and family have been offering me condolences as though he were my family member for the past few days after the surprisingly ubiquitous news of his death has been permeating the media.

I didn’t post something on Facebook or anywhere else. It didn’t seem enough. And even though I am a man in my 50’s, I must admit that my soul is a little heavy about it.

Such an influence, such a point of orientation is gone from my life.  And yet, do your childhood influences ever really go away? They pushed you in a certain direction as you left the shore but that initial shove ripples through your life. Maybe the best you can hope for is that you will influence others in a good way.

As a kid I always felt an attraction to the drums but was turned away at every opportunity. The school band and the high-school band needed trumpet players, and so I was given a place in the brass section.  But, when I went to see the Signals concert my sophomore year at the St Louis Checkerdome I began what would be a new course in my life.

Because I’m a nerd I didn’t buy a t-shirt or button at the merchandise kiosk. I purchased a tour program the same dimensions as their new album with the Signals Dalmatian sniffing the red fire hydrant. We found our seats and I opened the program and began thumbing through the large images of the band to familiarize myself with what it was we were about to see. And there was the photo of Neil Peart grinning with sunglasses, Expos baseball hat, headphones and cheesy 80’s moustache from behind that serious set of drums, and I began to read.

“Once again, they’re Tamas,” he explained, writing about his gorgeous drum set. I read a few of the vignettes describing the backgrounds of each of their songs and my friend elbowed me to join him to hit the bathrooms before the concert would begin.

As I peed, I overheard some guys a few urinals down complaining that it was too bad that the drummer was dying. I was shocked. I had just “met” this guy with his interesting writing style a few minutes ago and I was looking forward to learning more about him. I remember noticing from the photos in the tour program how short his hair was, and that he looked older and more restrained than what I thought a rockstar should look. “That’s why his hair’s so short,” the other guy at the urinal submitted. “Brain cancer.” I remember this clearly but don’t know why he hypothesized this very specific disease. I do remember thinking that I better hurry up and start enjoying this guy because apparently his time was limited. Fortunately, those guys were wrong in their diagnosis. Peart lived many years after that 1982 tour. He later spoke about the strange rumor and about how strange it was that strangers would approach him on the street to ask about it. “Imagine if it were true,” he said. “That you would approach a stranger in that way!”

Years later I can only guess that this misdiagnosis by a burnout in a concert hall john must have been because Peart was known for his brain. On one live album, bandmate Geddy Lee introduces him as he leads into his requisite solo: “Okay kids, it’s time for Doctor Braino.” He was “The Professor.”

As I zipped up and headed back to my seat in the 13th row on Alex’s side I looked forward to a concert without realizing that it would change my life.

That night I made the decision to follow my inclination to play the drums. I went to a local music shop and purchased a little white set of “Mico-sonic” off-brand drums from a guy named Steve Strayhorn. Steve was nice enough to patiently answer all my questions every time I called the shop over the next few weeks. He later became one of my drum teachers. He was a hell of a drummer (especially impressive at Samba), a very nice guy and a wonderful influence. He died a few years ago from cancer.

Of course I struggled my whole drumming life to play the way Neil played. Playing drums offered me enough of an identity in high school that I was afforded a few friends, a quest and (as Joe Rogan says) something to suck at that you can try to get better at.  This last element became an important part of my life throughout my life. And Peart set the bar high.

Of course I was way into Peart. Not only did I study his drumming; I read his lyrics and interviews and picked up the suggestions that he dropped pointing to the writers of what he called the “golden age of American literature,” Hemingway, Dos Passos, Fitzgerald and the other Lost Generation artists.

I took up and learned to enjoy road cycling and other cardio activities.

He was a Renaissance Man and he taught me that the world offers so many handles to grab hold of and to explore. 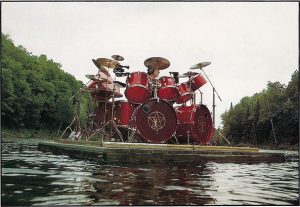 Sometime after high school I drifted around without an aim. At some point I wrote him a letter and sent it to him care of Modern Drummer Magazine. I didn’t know that this was a thing. I certainly didn’t expect for him to write back. But one day the mail came and there was a postcard from Canada with that iconic shot of him behind the drums on a raft on Lac Perry outside Le Studio. It meant the world to me. It meant that my mundane life in the American Midwest might actually be connected in some way with the outrageous dreams that filled my mind. Maybe there was a path to wonderful things if only one took a chance!  To me it meant that if an impulse was felt; it should be acted on.

In a way, Peart got me into college. Not knowing what to major in, I went and studied Literature and Writing because he had already given me a head start… being the “professor” as he was . I wrote a couple books to explore that itch. I think they were pretty good. They still sit in boxes in my upstairs closet.

Over the years Peart’s lyrics would mean new things as I entered different phases of my life. His lyrics expressed thoughts that might be a little beyond where you were when you first heard them, but that you would grow into.

Today, as moody thoughts continued to keep me brooding, I decided to sit down at my computer and try to sort it out. He often quoted another writer as having said, “I write so I know what I’m thinking.” It is practical advice.

When I think of Peart’s poetry and lyrics I often found myself as perplexed when looking at the song in its entirety as if I were examining a cubist painting. Love song lyrics were often juxtaposed with what seemed technical specs. “We need someone to talk to and someone to sweep the floors. Incomplete.” What?!  “Atmospheric disturbance, the feverish flux of human interface and interchange.”

But sometimes phrases would cut through with a heavy authority and weight.

If love survives, though everything is lost. We will pay the price but we will not count the cost.

As I write this tribute and summing up of my relationship to my childhood idol upon learning of his death I suppose I just want to offer a wave of respect to him and a “thank you.”