5 Steps for Sawing My Assistant in Half, Quitting My 100K Job (And Other Seemingly Death-Defying Tricks) 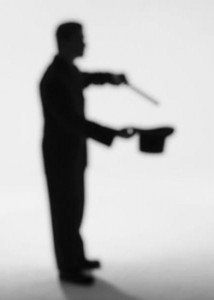 Every conjurer worth his weight, every blogger of minimalism, has a certain repertoire. Certain tricks that are expected to have been mastered within a practitioner’s oeuvre that must be performed with a certain dash of flair that separates the practitioner of the seemingly impossible standing before you from the hacks who know a few slights of hand, distractions meant to keep you mesmerized long enough for them to grab for your money without you even realizing it’s gone.

We as spectators of magic tricks and real-world transcendentalism are secretly hoping that (in both cases) people can truly float above the ground that pulls them to it, that dollars seemingly torn, cut, burned and otherwise defiled can manage to reconstitute, that where before we thought we needed more we can actually survive and even thrive with what before seemed impossibly less.

One of the tricks of the modern-day minimalists is the claim that goes something like this: Learn how I kicked my 100K+  job the curb and managed to actually improved my life!

While on the surface this does seem to be a very impressive feat, I’m going to give you a peek at a few of the techniques, a tour of the smoke and mirrors behind the scenes that allow you to honestly make a claim like this and to actually pull it off.

What all these steps really have in common is that you have to begin thinking and planning for the inevitable which is not something to fear. Plan for the future that is a better life. Save not for a rainy day, but a sunny one. This is a life insurance policy that pays off when you begin truly living.