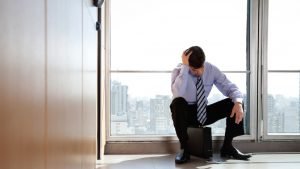 I was a regular guy with substantial but not alarming debt between myself and my wife. We live in a place with very reasonable cost of living for instance, our mortgage is 600 per month. I was working a nine-to-five, making about $50,000. One of the perks they gave me was a paid cell-phone which meant the phone could ring at any time. Not really a nine-to-five.

I had a job. A steady job that I could count on so long as I worked hard. And I enjoyed it.

Since I was 11 years old, I went to work. I clocked in and clocked out. I logged in and logged out. I made money and I spent money. And I always thought about how it would be to have more money. One day I thought to myself that I should make a goal of paying down our debt. Just seemed like something worth taking up. We had credit cards and student loans, a couple cars, the house and this and that. And then my company-sponsored phone rang to the tune of $100,000.

A friend, who’s job it was to recruit tech workers, asked me specifically what I did all day long. She might have something for me. It paid $100,000. I sent her my resume: I took care of several of our company’s websites. I wrote and edited articles. I did video interviews of lawyers from our firm to show off how sharp our people were. I handled web content, that kind of stuff. I handled the shit. And not only did I handle it. I thought it up. I got really interested in our legal field and I intelligently interviewed authors to post on our website. So, we’re not talking about re-posting a clever divorce meme on Facebook. We’re talking about content creation. I created content that people then liked and forwarded and followed and tweeted.

My friend told me I was a perfect match for a company she had in mind. She set me up with an interview.

I got the job. I was interviewed by a corporate vice president at one of the largest corporations in our region, not in our state – in our region. And probably one of the top 100 businesses in the nation. Me!  Was I supposed to be talking about a hundred-thousand a year job?

The VP of Marketing who interviewed me had once been a local news personality. A much-loved local news personality. There we were in the interview room. She was sitting right next to me looking all celebrity and I was answering her questions. I was being straight forward. She asked why I was interviewing if I already had a job I loved. I couldn’t lie: $100,000 was why. If I can do for you what I do for them but make so much more I’m interested. The other lady in the room, the one who would be my new boss didn’t say much of anything.

That hour in that room made it clear to me that I was being hired by the VP because of the workload she felt my boss had. I was the help that was being offered.

For the next year the money arrived as promised but the work did not. My new boss disappeared. She still worked there. I would catch a glance at her across a crowded meet room or just as the elevator doors were closing, but as a boss she disappeared. She stuck me in a cubicle and told me to sit. She rarely even spoke to me.

I felt guilty for doing next to nothing. I actually brought forward a few suggestions for small projects that I volunteered to work on but my new boss rejected them with a pleasant smile saying,  “No, you should have enough to work on. Just concentrate on what I’ve given you.” Was there something I was missing? Was she Mr. Miagi-ing me? Testing my character or commitment? I felt like a character in a Kafka novel. I was a man paid to do nothing and it was driving me crazy trying to figure out the catch.

There was no catch. The corporate machine moved slowly. No one wanted to rock any boats by pressing down too hard on their own accelerator. Even the smallest decision required paperwork. You show everyone you’re a team player and you can have a nice long run here. But I just needed to bounce around always full of nervous energy. I wanted to think macro and micro at the same time and had a hard time staying in my cubbyhole. I was freaking out in what seemed some kind of sensory-depravation chamber. I itched.

Afraid that someone would stick his head into my cubicle and ask what I do all day long, I started my own project. I could have called it Project Nervous Energy. I went page by page through our enormous corporate website and made notes for improvements and fixes. It was a grand plan in which I actually created a graphic re-design of the site along with all new copy.

But no one ever showed up to ask questions. I showed a couple work friends who really didn’t have a problem with the hours of dead time. They played games on their phones and ordered things online and always seemed. They asked if I was planning on showing it to her. I slowly shook my head and smiled. Only if she asks to see it, and she won’t ask.

My weekends were what weekends should be. I was off and unplugged – not a care in the world. I dreaded Mondays as I fastened on the corporate leash. I hated the unnecessary. The twenty-mile commute. The undershirt and uncomfortable shoes. The office chair and the desk that didn’t fit. My boss’s only real demand of me was that I take a 15-minute break in the morning, a 15-minute break in the afternoon, a half-hour for lunch and be at my desk every other moment. I found this laughable and I pitied her a little for it.

When my lunch break time arrived I would bolt out into the summer heat and walk quickly as if with a purpose through St Louis. Breaking off the physical rust. When I returned to my desk my white work shirt would be thoroughly soaked.

My wife and the girls and I lived as if there hadn’t been a raise. We paid off our credit cards and student loans. An interesting side note was that on the day that I mailed my last credit card payment I actually felt different as I headed into work. I really felt a strange kind of peace that I hadn’t felt in as long as I could remember. It came with the realization that whatever I earned to day and any day going forward would be all mine. The $100,00/year job had paid for my freedom.

Not long after shaking off my debtors came the notice that my contract which had been extended twice would not be extended again. My boss was apologetic. I thanked her for the opportunity and wished her well. I walked out of that same conference room where I had been hired a year before knowing that my $100,000 job had just disappeared. I grinned from ear to ear because I was free.

How long might I have left it go on had my boss renewed my contract? Who knows? Through creating my Project Nervous Energy I created a diversion at work to keep me sane. Maybe the rest of my life would have been playing at creating value for someone who didn’t really want my help but insisted on paying me all the same.  I justify my time there by saying that it was a tack in my course that allowed me to pay off some bills.  Being free of debt greatly reduces the depth that a job can inflict itself under your skin. A $100,000/year job is just that. The number doesn’t make it heaven or hell, it’s only an aspect of how it will impact your life. And if it doesn’t fit it doesn’t fit.

I daydreamed about my next move. I imagined the possibility of starting a business web development company. I get to bounce around from one thing to another all day and business has been good. Number are just numbers and somewhere along that scale you may discover that enough is enough. That’s what I do now and I’m much happier.